I have several violins that are older than the latest Feb 2020 model.

These instruments sound good and play well, and are much too good to scrap for parts - they seem to be stable and reliable but they don't have all the refinements of my latest version. (See the previous post for general info and contact me for specific details of any individual instrument.)

Prices will vary depending on the individual instrument but will be in the range £500-650. That's around half price or a little more.

These prices are barely worth my while - it would probably be more commercially viable to scrap them for parts and not undercut myself. However, it pains me to destroy a nice working instrument!

Since I'm making almost nothing over the cost of building them, I can only afford to offer a more limited sort of warranty - any repairs, upgrades or part replacements in the future may need to be charged for at my discretion.

However, I guarantee that any buyer of one of these will never need to pay me as much in total as buying a full-price instrument.

This offer is valid until the end of March.

I don't expect this situation to arise again as I won't be making so many ahead of demand from now on. So don't expect future similar offers! 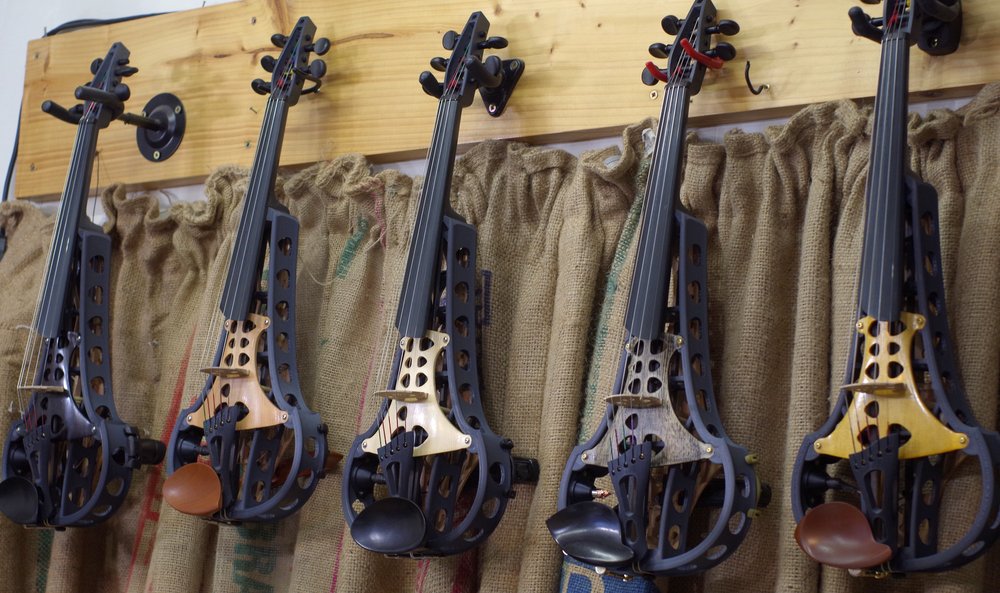 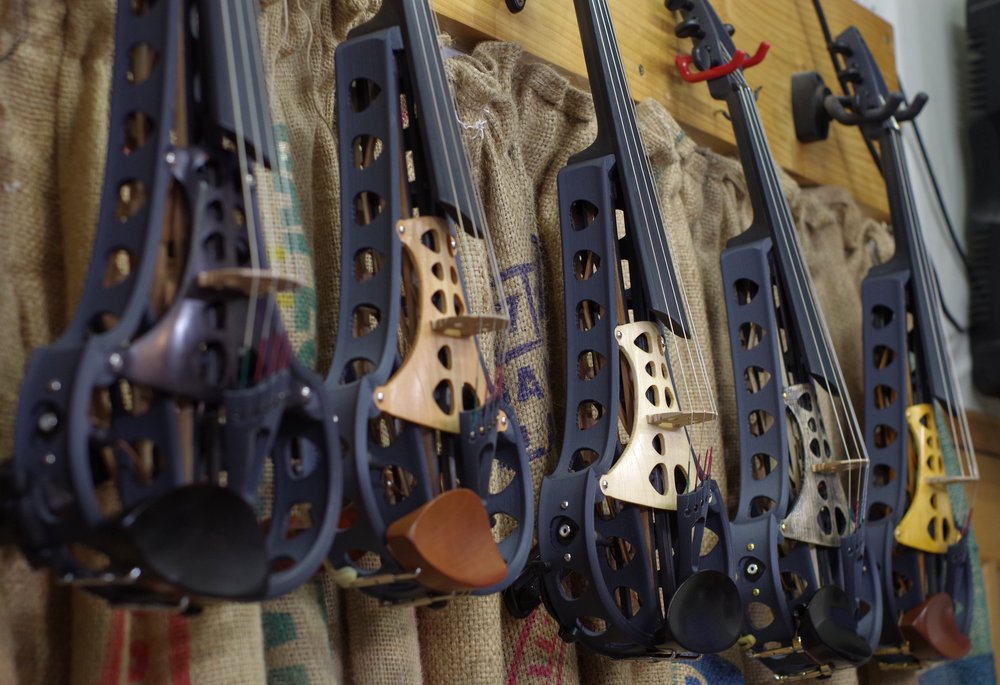 Latest model buyers are not forgotten

For buyers of the full price latest model, until the end of March I will also offer free UK shipping (normally £30) and a free extra preamp cable (£40).

Any purchase that is agreed and paid for before the end of March qualifies for these deals.

Since the initial release of the Sycorax I have made quite a few changes. Some are tiny and not worth mentioning here and some are more significant.

The "late 2019" instruments are the earliest ones I still have for sale and they are being sold at a discount. They are not all identical since I was trying out a few slightly different designs, but they are all similar and all the things I tried worked much the same. The changes for these included:

The sycorax electric violin output jack is mounted on a separate piece that can be changed in about 10 minutes.

I call this piece a pod and it contains the jack and any electronics that may be required.

I have made this as a modular part so that I can easily offer different options for the output electronics and jack, and so that players can even change from time to time as suits them.

So far there are two options: 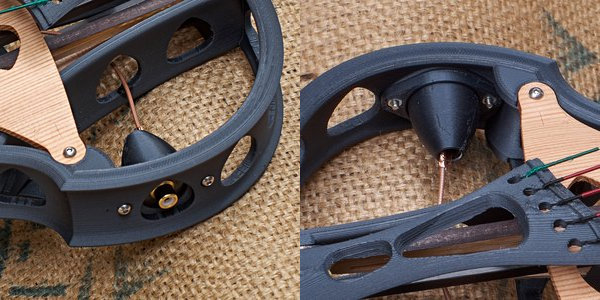 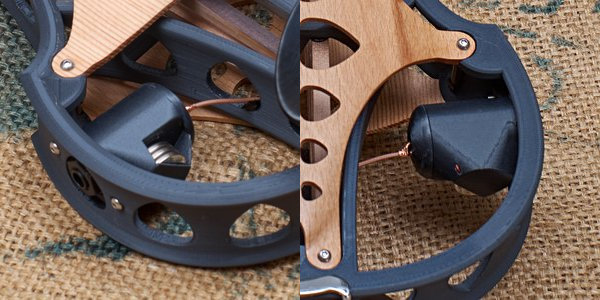 Other options are certainly possible, for example a passive jack output would be no problem, but I don't currently see much need for it. The two options above are what I have ready so far.

Each of the options is convenient in a different situation.

This may be best expressed as a list of pros and cons of each setup.

This is my personal preferred option.

What is Different about the Sycorax

I originally wrote this as a guide for what I would say in an explainer video. However the video isn't going to happen any time soon, so I'm posting it here.

There is considerable overlap with my earlier posts , but sometimes it is good to explain the same thing in different ways.

An acoustic violin is a fairly simple machine that behaves in a very complex way. I will explain the simple part and gloss over the complexities.

The violin family has a distinct mechanical action and construction that is different from plucked string instruments and also from bowed strings from other cultures.

An acoustic violin has 7 parts involved in making the sound that I will explain briefly.

The string, the bridge, soundpost, bassbar, and the top, back, and internal air.

This moves the top of the bridge side to side.

The bridge sits on the top, which is a lightweight and somewhat mobile piece of thin wood , usually spruce. The top is supported under the treble side of the bridge with the soundpost, which is a 6mm diameter spruce dowel, which extends to the back. The back is made of a stiffer harder heavier wood, usually maple, and is a bit mobile but much less so than the top.

The effect of this is that at the fundamental frequency of the string the treble side of the bridge is held relatively still.

This turns the bridge into a lever with the fulcrum under the treble side, sideways vibration is applied to the top and so the bass side of the bridge is levered up and down. That is what we want as it drives the top in and out which is an effective way to transmit sound to the air.

Glued under the top under the bass side of the bridge is a piece of wood that runs lengthways along the violin, called the bass bar. This helps support the pressure of the bridge on the top and also transmits vibration to the ends of the top further from the bridge.

The main thing to understand about this right now is that the bridge and the parts it is connected to are quite mobile in a complex way with many overlapping resonances.

The top and back have multiple resonances and combine with the internal air resonance to shape the final tone.

What we actually hear in the air is a mixture of the sound emitted from the top, and the internal air resonance through the f-holes with small contributions from the back of the instrument and directly from the strings and bridge.

It sounds quite different depending on where you listen from. Most of the sound is projected out the front, but it is not even.

When amplifying an acoustic violin the only way to get all of that sound is with a microphone in the air, and even then you only get one angle per mic.

So amplified acoustic violins often use a contact pickup of some sort that senses the vibration of one part of the instrument. These are often in the bridge, but that doesn't give a very good impression of the overall sound, since it picks up very little from the top and even less from the back.

If you have to choose a single point to sense the vibration of the whole instrument that gives a reasonably balanced summary of the acoustic sound then the soundpost is the best place.

I make a pickup system that uses a soundpost mounted pickup for acoustic violins, and as you will see soon , I use much the same system in my electric violins.

A typical electric violin has strings and a bridge much the same as an acoustic. However the bridge is mounted on a rigid body. The feet of the bridge can't move much, or at all.

So the movement at the top of the bridge where the string is driving it, is limited to the flexibility in the bridge itself.

The bridge is small and made of stiff material , traditionally maple, and the flexibility it has is really only relevant at frequencies well above the fundamental frequency of the note.

A regular electric violin has no mobile top or back and no soundpost or bass bar and no lever action converting the side to side movement of the top into an up and down movement of the bass side foot. The bridge just rocks side to side , bending a tiny bit at the waist with its feet held still.

Because the body is rigid and can't move much it doesn't transmit sound to the air as it isn't moving.

Almost all electric violins use a pickup mounted in the bridge or directly under it. There really isn't any other viable option on this sort of instrument since the rest of the instrument isn't vibrating enough to be useful.

There are two main problems with this approach - one is that the sound directly from the bridge, with no additional resonances or complexifying factors, is thin and one dimensional with the characteristic mosquito-like tone of electric violins.

The other problem is the feel - this has two aspects - one is that the rigid bridge feels stiff and unresponsive to make the note speak, and the other is that once the string is moving the rigid bridge reflects more energy back into the string, so the string continues trying to vibrate by itself and it is harder to keep control of it with the bow. This is why electric violins don't just sound different to acoustics but also feel very different under the bow.

The Sycorax violin is a complete re-imagining of what an electric violin should be like, starting from the mechanical action described at the start that makes a violin a violin.

It has a top, back, and soundpost a lot like an acoustic and this creates the same lever action in the bridge and top as an acoustic.

This means that the motion of the bridge is similar to an acoustic and the sycorax feels flexible and responsive to play rather than stiff and hard to control like a rigid bodied instrument.

Also , the pickup in the sycorax is in the soundpost, rather than in the bridge so it can sense the more complex and gracious tone that exists at that point.

The sycorax is also different from an acoustic in a few important ways.

The differences are to do with how the instrument interacts with the air. On an acoustic the whole purpose is to make the air vibrate with the vibration of the instrument. So there is a relatively large soundboard which moves air and a body of enclosed air which resonates at a low frequency and helps move air at lower pitch.

On a regular electric the air doesn’t get moved much because the instrument itself isn’t moving much , it is built too rigidly to move.

That doesn’t result in the tone I want, so the Sycorax moves like an acoustic, but we don’t want it moving air – and that is why the top and back are small and full of holes – to minimise the connection to the surrounding air.

The sides also have holes partly for this reason, even though they don’t vibrate as much as the top and back.

There is no enclosed airspace like on an acoustic, this is partly because the Sycorax doesn’t need the bass boost of that resonance because of the sound being picked up in the soundpost, and of course also because it would create movement in the surrounding air which we don’t want.

Even more important than making the violin quiet when it isn’t plugged in , is making sure that movement in the surrounding air doesn’t move the violin. On a loud stage an acoustic violin vibrates with all the surrounding sound, not just with it’s own sound, this then gets picked up by the pickup and amplified, which causes feedback. The Sycorax avoids this by interacting with the air as little as possible in either direction.